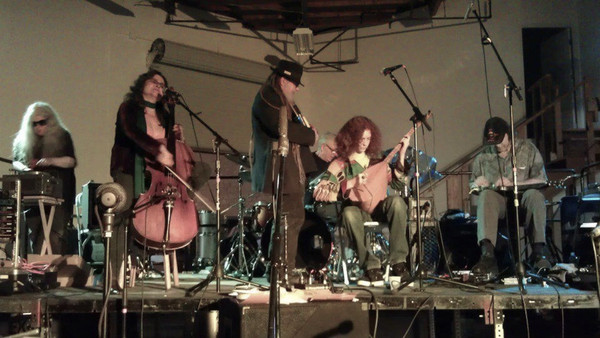 Smegma is a band with free-noise-outsider musicians from Portland, Oregon; even if those main characters originated from the collective of weird, music and art performers of Los Angeles Free Music Society; it was formed in 1972, Pasadena, and then moved to Portland in the few following years. LAFMS organized music and visual performances, workshops, art installations, etc in the name of art-damaging attitude, over-passing a certain ’60 idealism with a proto-punk, nihilistic way. But if that collective had certain avant-arty pretentions, some of that collaborator, like Smegma more properly, have more extemporaneous intentions, playing with visceral free improvisations and outsider sounds, without not professional performer and music writer, especially with a suburban creativity.

Smegma was born in early ’70 with founding members Dennis Duck (Dennis Mehaffey) and Tom Recchion, where this last was a key figure for the group birth. Recchion had a record store in Pasadena, Poh-Baa Records, where future main characters of Smegma and LAFMS had encountered there frequently, just before those projects debuted. Smegma sonic course was characterized not only through the discovery of musical weirdness of that time, but the etherodoxity in their situations and performing mindset too, which was not uncommon in that proto-noise macro-scene. A peculiar exemple, there was a Smegma concert in a Hippy Renaissance Fair as part of Jerry Lewis Muscular Dystrophy Telethon in San Diego, with several punks as listeners in the audience, playing after an US military marine band; everything was changing in experimental music, through its not completely expressed potential, and where every sounds was enlightening and new, so all was fair in limb of those sounds.

In the early artistic path of Smegma, a first work, in 1974/’75, and which wasn’t un-released until 1997, was the collaboration with Larry ‘Wild Man’ Fischer the outsider singer discovered by Frank Zappa‘s Straight Records. The result was a free, situationist music with pop and blues elements but aleatory structurally; in a way it could recall the early Velvet Underground concept, where lo-fi physicity meets psychedelic influences with a dada creativity. The adult-childish Wild Man voice and the sonic jazzish craftsmanship of Smegma is a right mix of spontaneous, “art brut” music in a joking way. Surely an embryonal concept for Smegma, whose efforts will slip in a more meditated form.

“Glamour Girl, 1941” was the first album of Smegma, released in 1979 by the label that is associated with Los Angeles Free Music Society; it is fueled by weird, outsider creativity, structured in the name of a libertarian, powering soul. In this freely improvisational sonic course, there’s also a characterization with meditated parts and pre-production phases, through an articulated composing plan, or with recording which will be manipulated in those extravagant tracks. In particular, “1980 A.R.” and “Ladies Nite at The Ortho Lounge” are chaotic collages with several overdubbed, analog-altered voices, where that experimental effort became an occasion to create an extemporaneous musical joke which played with random element; but if “1980 AR” has a free-jazzish soundscape, in that aleatory flow of voices, Ladies Nite is a multiple and cacophonic choir with an apparently inconclusive form with a naïf way which kids its audience (we could say that sonic chaos tends entropically onto its sarcastic aim). Instead, “Die Wo-Wo” is more periodic in its stochastic creativity; a devilish, almost-non-verbal voice, which expresses dark irony with grave, elastic tones through the cadence of that “Die” word.

Different sonorities are expressed in “Glamour Girl, 1941” by other tracks. Ethereal melodic lines characterized “I Am Not Artist” and “Half A Billion” with free fluidity of that analog-synth sound, hard and chaotic guitar riffs (Half A Billion), where the both tracks offer psychedelic harmonies too. Instead, an interesting tribute to historical free jazz (in a dark way) was “Prowing Nose”, where their improvisational effort encounters their love for that fervid black music. It’s not absolutely a case, free jazz-amateurs of Smegma will collaborate in their future with Steve MacKay and Perry Robinson (this last was a main character in 1964 October Revolution in Jazz festival).

Anyway, “Glamour Girl, 1941” remains an obscure work of Smegma, interesting in its peculiar idea which is idiosynctatic and ambiguous, like its cover art; in this there’s a flapper with gasmask, representing peaceful feeling which flows in a dystopian reality, properly like early Smegma music between echos of jazz and the chaotic power of proto-noise. Indeed, “Glamour Girl, 1941” is an example of how different noise cultures find a lighting crucial point, between ’60-’70 and modern noise of ’80 and ’90 decades.