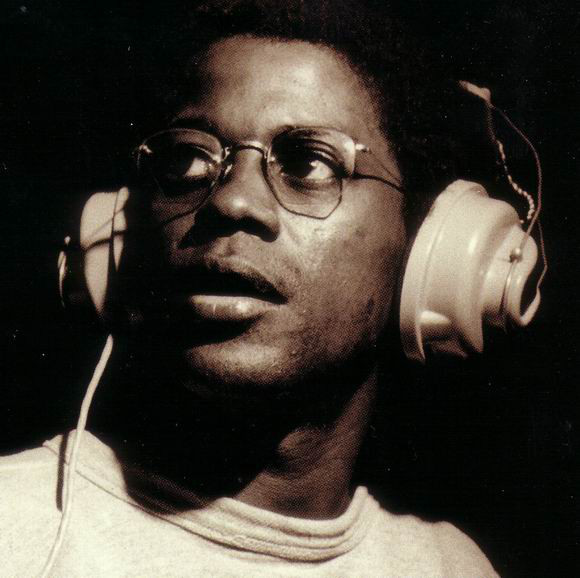 Andrew Hill, post-bop/free jazz musician born in Chicago and in 1931, developed a singular music poetry in the name of his African origins and feelings (typical of that era, that was the ’60 years), and through a personal sonic research too. After the post-bop-ish experiments of Point Of Departure, more traditionally straight but atonally complex at same time, with the precious contribution of the lighting multi-instrumentalist Eric Dolphy (this album was recorded a few of months before Dolphy passed away for diabetes) and other works that are Andrew!!! and Pax, through the above-mentioned exp policy, Hill released his other masterpiece, Compulsions!!!!!. It was published for Blue Note Records in 1967, and recorded to Van Gelder Studio (New Jersey), in 1965. 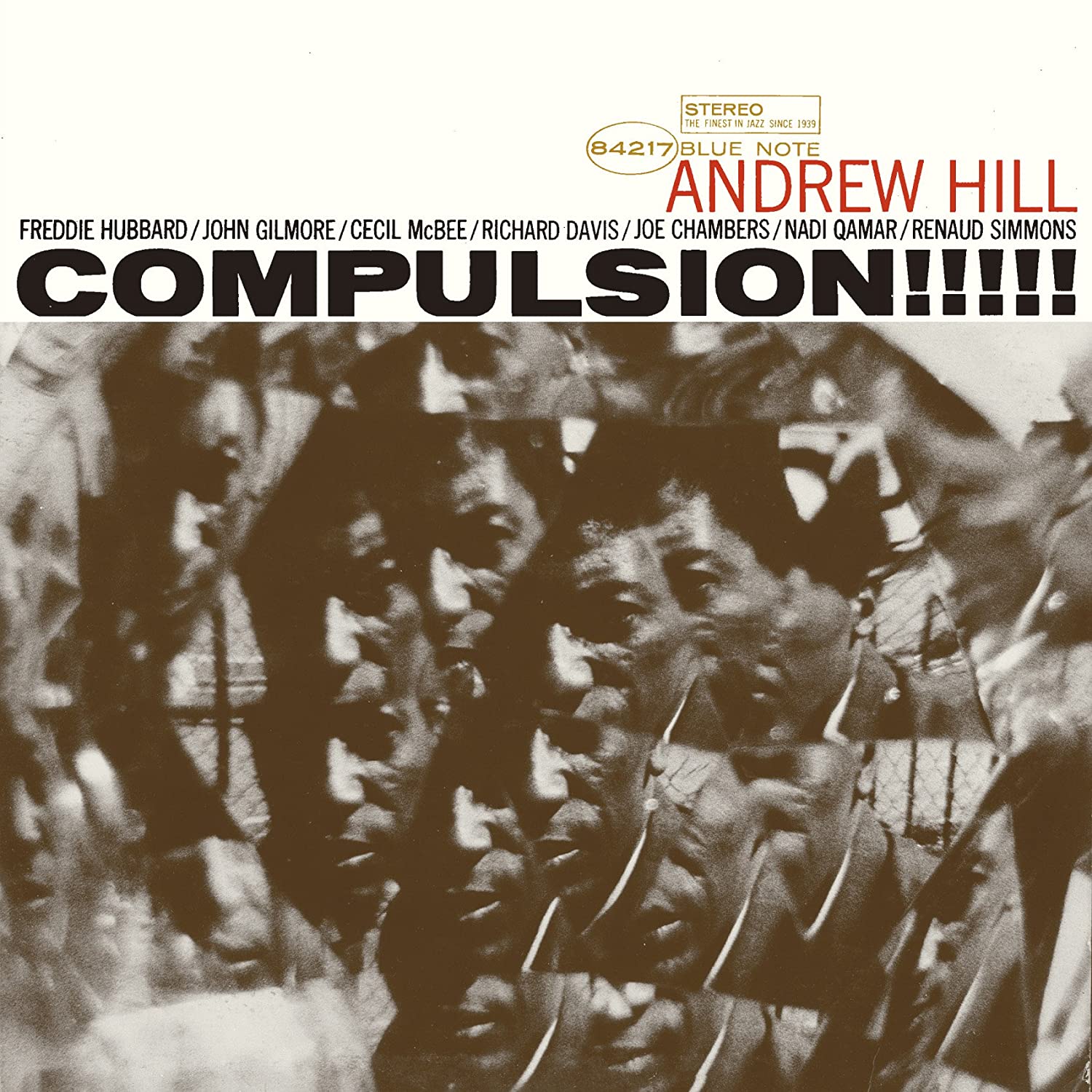 Compulsion!!!!! by Andrew Hill. Photo and artwork by Reid Miles.

Compulsion!!!!! districates in jazz and africanist territory with tribal percussionism of Nadi Qamar and Renaud Simmons, and complex mathematical pattern by drummer Joe Chambers and bassists Cecil McBee and Richard Davis, with baroque melodic lines, between the contemporaneous free elasticity of solo sessions (with trumpetist Freddie Hubbard and the saxophonist/bass clarinetist John Gilmore) and a certain classical-romantic feeling, that is baroque in its fugal expression through the Hill’s chaotic naivety on piano. In particular, the wavering and fast beat on congas, and metallic aleatory sounds to mama likembi, a kind of thumb piano (played by Qamar especially on the Premonition track, blending on that sweet and sour soundscape) are some peculiar elements of a renewal context in New Thing music with an original approach and heterodox sensibility. Indeed, if Compulsion, the main, title-track of A side, is characterized by speedness, more well-ordered, but in an Africanist sense, otherwise the above-mentioned track Premonition (of B side) is another important part of the record (or we could say the most important one), but different in that Romantic-like contest (in an afro-american way); the Freddie Hubbard’s trumpeter and John Gilmore’s bass clarinet give a cosmic harmony with rhythmic session and the piano, where the outer space is not different to Africa or the roots of people with African descent and its associated freedom. John Gilmore was one of the most important musicians of Sun Ra‘s Arkestra, which was admired by John Coltrane for his approach to atonality on sax. Hubbard collaborated with Coltrane, Eric Dolphy and Ornette Coleman, and other main characters of free jazz, and his style recalls a more classic attitude, in a hard-bop way. These counterposed elements (which recalls to the near past of hard bop and the free, africanist thing too) characterizes this release in the name of a harlequinesque creativity, not in an ordinary way, but with a romantic, sweet and sour composing. 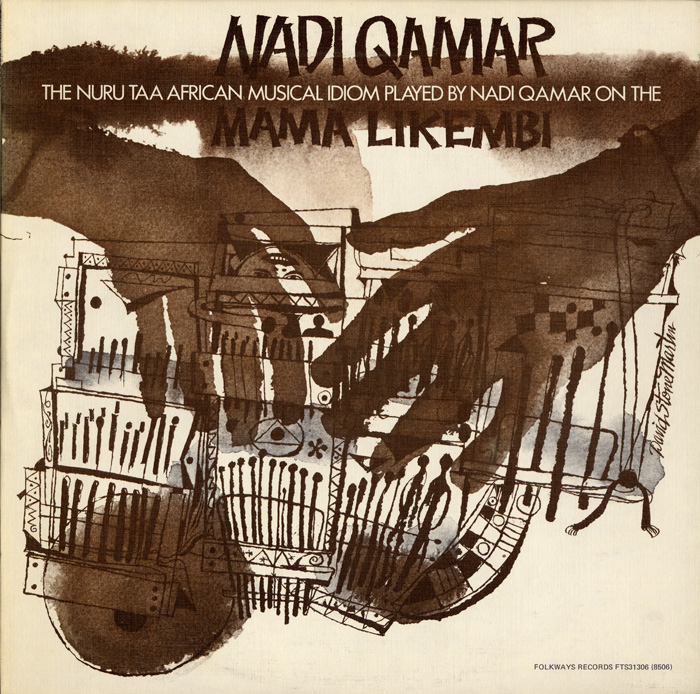 Anyway, the contribution of Nadi Qamar was very important, offering an original and creative element in that sound. Qamar was born Thomas Spaulding Given in Madisonville, Ohio, amid segregation. Despite the inconvenience of health problems (diphtheria, epilepsy and tuberculosis), he became an important jazz pianist with several collaboration to many main characters of jazz contest (at beginning he gave a contribution to Charles Mingus albums in ’50), and an Afromusicologist pioneer; indeed, a characteristic example in this sense was the invention of mama-likembi, a personal instrument inspired to a ethnic thumb piano (like likembe, mbira, and kalimba), even if it is to play with fingers. A performance of this sonic mean was in Compulsions!!!!!, and a singular effort of this also appears properly in his solo work of 1975, that was The Nuru Taa African Musical Idiom Played By Nadi Quamar On The Mama Likembi, for Folkways Records; a sonic journey in Africanist culture, in a personal and naturalistically dissonant way. The melodic lines of mama-likembi are sweet and sour at same time, showing a distance to Western afro-american culture poetry through a naïf and exotically poetic creativity, and a flow of consciousness in his further origins; Qamar suffers his precarious state of health and the racial segregation, and his aleatory and introspective playing reflects his condintions, more strong in that past living. This sound is minimal in his structure, but essential in his sonic meaning (to the point of view of his artistic proposal); but the sound shows its organicity with continuous shifting to different tunes (enriching the sound in its totality), with an ethnic-dreaming elasticity. 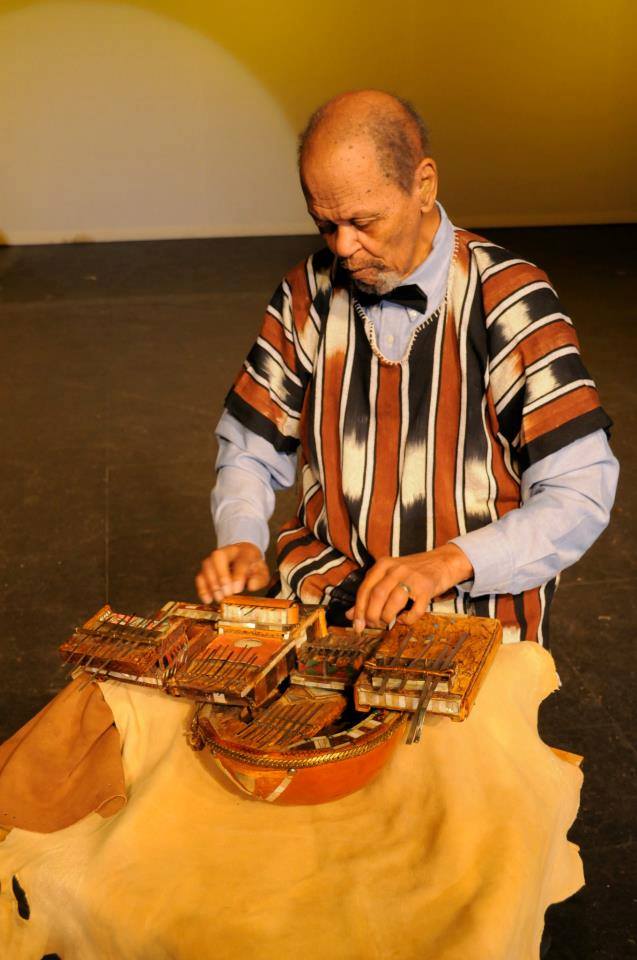 African roots encounters some of the main pages of historical jazz music with Andrew Hill and Nadi Qamar in the sign of an interesting, freely musical course.