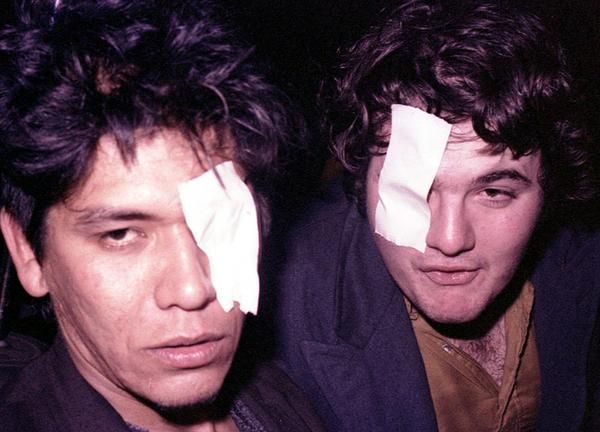 In Los Angeles territory and during the first half of ’80, the main characters of that local and suburban scene used to exhibit in private houses, or in outside gardens on occasion of those frequent barbecue parties. Most important sonic, local realities like Black Flag, Minutemen, Saccharine Trust, Descendents, and Salvation Army, Plugz, Slivers too, managed those energetic and lighting music experiences, between limited spaces and invasive hate of police, which didn’t miss the opportunity to cause trouble, in those occasional crowded places, to the caustic noisers, harasser in their ideology (in more general way). In this regard, characteristic is the Kim Gordon‘s autobiography, “Girl In A Band: A Memoir“, with her reportage on a Black Flag set (with Henry Rollins) at a private residence in Hermosa Beach. That suburban neighborhood in California zone was almost and sadly desolated, with one floor residences, where the Pacific Ocean communicates, as a similar counterpart, the specular isolation of that anthropomorphized land; that live set, violent and in a little space, where Rollins thrashed in every direction in a obsessive way, reflects the idiosyncratic condition of the American post-punk mentality the nihilism of that time, with a small-town approach, through extemporaneous nature and theatricality.

Anyway, the side of indie rock performances was also characterized by hilarious episodes. First of all, we’ll talk about some of those main characters as an introduction. Minutemen musical poetry was in the name of an open-minded, progressive sound, between free jazz and punk sonorities. Minutemen, formed in San Pedro, are punk maniacs and history geeks Dennes Boon (guitar, voice) and Mike Watt (bass, voice), and the drummer George Hurley. If the Black Flag hardcore-prog-metal thing was the dark, nihilistic (and more apolitical) side of the SST Records, Minutemen were more politically active, lighting and enlightening with their music and lyrics. The first record, “The Punch Line“, marks a delimited line between coservative punk/hardcore attitude and a fervid, mathematical idea of free creativity. The work was recorded in Fall of ’80 and released by SST Records (the label of Black Flag chiefs, who were Greg Ginn (guitar) and Chuck Dukowski (bass)) in November 1981, and was the second recorded work and the third release (including every official record, like EP and full-length). It followed the second EP, “Joy“, recorded and released in August ’81 for New Alliance, the Boon, Watt and Martin Tamburovich (previously voice in Reactionaries, proto-Minutemen group) local label in San Pedro; the group gave a little effort before The Punch Line publication, precisely because SST Records moved forward slowly. Joy was a further evolution of the Minutemen sonic course. If lyrics are shaped into images of punk/hardcore achetypes (with an intelligent form), a more progressive, mathematical attitude is dominant in the work, that is less rough in a punk way and less melodic in that recent DIY context sense; the abstractism was the main components in their poetry of that period. The next works, Bean-Spill, an EP for Thermidor Records, released in 1982, and the album “What Makes A Man Start Fires?” moves noise/proto-math territories, and if the above-mentioned mini-album is linked to a cleaning sensibility of sound, in “What Makes” was strong in its exp attitude, recurring in those years and in the next period, with a generally renewed way.

Other main characters are Jack Brewer and Joe Baiza, voice and guitar in Saccharine Trust, a noise, proto-jazzcore band originary from Wilmington (South Bay), and ever-described as the black sheeps of SST Records. Their sound is very fervid and heterodox, through free jazz feeling which had miss sometimes a more evident linkage with hardcore sonorities. The sharp guitar riffs, the complex rhythmic section and the preaching-like speaking delineated an important part of SST roster, although in a more obscure way, and characterized their releases. For example, “Pagan Icons” first Saccharine Trust EP of 1981, is some of these lighting exemples, which takes inspiration from post-punk culture, like The Fall, Gang Of Four, PiL, The Pop Group, etc, through a sarcastic and free noise The Doors’ version. “We Don’t Need Freedom” is a hymn to punk generation, with nihilistic missive to past ’60 ideology which became largely mere righteousness; “We Don’t Need Freedom” is some of the most dominant songs in Saccharine Trust music path. But that course would become less lyrical and more noisy in the next part of the band course.

Coming back to the above-mentioned hilarious episode, some of performers of the cited two music realities matched between them in a guitar duel. In 1982 Minutemen got famous in that context, and Saccharine Trust released only two releases (“Pagan Icons” and the single “The Christmas Cry“, both for SST Records). It developed a competition, in particular, between D. Boon and Joe Baiza, who were friends from much time; Boon made several sarcastic comments to Baiza which concerned the lack of Saccharine Trust first album (it will be the monumental and likely entangled Surviving You, Always, published in 1984 for SST). At the end, as goliardic expression Baiza said to the other one “I’ll challenge you to a guitar duel”, and then the thing will be taken more seriously. In December 17 1982, Minutemen and Saccharine Trust played to Anti-Club (Hollywood), and Baiza and Boon opened with a funny guitar battle, where Spot (the real name is Glen Lockett, producer and collaborator for SST Records) was the referee; they had two masks on: a knitted mask (Baiza) and a gorilla one (Boon). Once Spot said “Ding, ding!”, the match began with exacerbating noisy sounds emanating from both guitars. Baiza reported the fact during an interview and spoke about a simultaneous start which followed an alternately playing, generating an amusing set and a hilarious and interesting (at same time) naïf experiment.

That sonic match was the expression of rivality between two monumental noise/proto-math groups, in a small-town background and nihilistic and (sometimes) low-fidelty post-punk/hardcore/indie rock context, necessary in that general and typically American feeling of camaraderie, and probably in the name of a plastic and joyful sound too, that we’ll see most evidently in the next future, especially in ’00 years with Flying Luttenbachers, Hella, Lighting Bolt, Giraffes, Giraffes, Black Dice, and so on. That music set – the guitar match – is an element in that important historical soundscape, where Minutemen, Saccharine Trust, Black Flag and others offer the shapes of “pop noise” to come.