HARDBOILED: PASSING THROUGH AND OVER THE AMERICAN SOUNDTRACK
di Giovanni Panetta
Interview with Paul Beauchamp and Luca Sigurtà. A sonic trip through their new record Hardboiled, an imaginary, dystopian and cinematographic tale, between John Carpenter and Italian soundtrack. 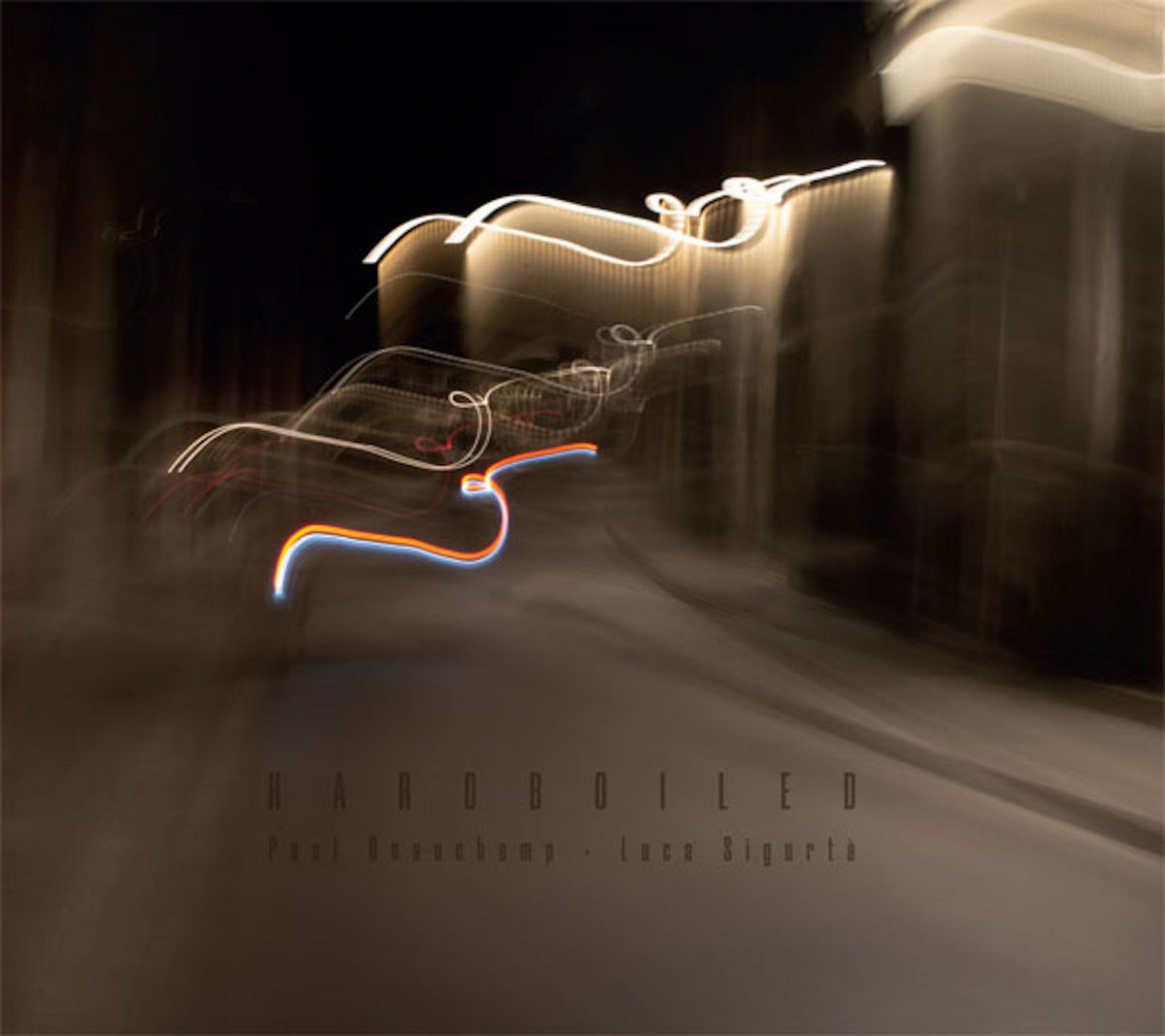 In this last September 11 (2021), Paul Beauchamp and Luca Sigurtà work, titled Hardboiled, was published by Tuscanian, experimental label (which explores different landscapes; any examples: noise, free improvisation and heterodox electronics) Kaczynski Editions. The record oscillates between the dystopian and futuristic periodic flow through John Carpenter soundtracks, simulating anxious atmosphere genating of that essential rhythmic heartbeat-like cadence generated by a drum machine, and, from an abstract point of view, the elasticity of ’70 Italian soundtrack, in which we found several main composers, like Ennio Morricone, Piero Umiliani, Claudio Simonetti, Luis Bacalov, Stelvio Cipriani, etc. The sound of Hardboiled is elegant and alien at same time, with a synthetic craftsmanship in the sign of a plasticity and static dynamism of periodic patterns and microrhythm (respectively managed by Beauchamp and Sigurtà) and plastic creativity – recalling noise and ambient too – under the rules of a crime or sci-fi, cinematographic tale flowing through a nightmarish course. Indeed, in this sonic complexity there is a playing and passing over on that above-mentioned American or Italian soundtrack, with a krautrock feeling (in a cosmic sense), and sometimes a lyrical, more exotic path, which characterizes in particular the final track (End Credits).

Following there is the interview with Paul Beauchamp and Luca Sigurtà, about Hardboiled course, some of their past work and their musical future.

Let’s begin to talk about your last release for Kaczynski Editions, Hardboiled. Could I ask you how this periodic and lysergic, crime-movie-styled sound was born?

Paul Beauchamp: “Hardboiled came about as a concept that Luca and I imagined after we decided to work together on a collaboration album. We’ve been friends for a long time and we both share a love for 70’s and 80’s detective movies so we used that as inspiration for our sound.”

Luca Sigurtà: “We then sent the final demo to Kaczynski guys. I have always enjoyed their work and most of all they are fantastic people. Their enthusiasm and dedication are truly an example.”

2) Hardboiled expresses wavering electronics with fervid loop playing, through a digital micro-rhythmic creating and an obscure, oblique psychedelia. Noisy lines blow up with distortions, and the above-mentioned oscillates generate a pattern with neat and smooth contrasts. In particular, well-ordered glitches and a further meditating to those cadences give an intelligent and austere form, similar to classical architecture with a sharp and alien manipulation. How was this lysergic and mathematical poetry born?

Paul Beauchamp: “It worked out rather naturally. Luca works a lot with microrythms while I tend to focus on drones so we basically already had our own sonic spaces to work in and that gave us the freedom to look for intriguing ways to mesh the two together.”

Luca Sigurtà: “Hardboiled is a very neat record. Exactly what I imagined when I started working on the first demos. The goal was to try to produce a record apparently far from our sound but that could still reflect us. It is a real pleasure to see how Paul works in the studio. He manages to simplify everything and make the work super professional.”

3) Talking about references on the above-mentioned record, there was a certain and broad inspiration by soundtrack anthor like Piero Umiliani and Ennio Morricone, we can say in an abstract way. That creative music history it was characterized by oblique, elastic and nihilistic atmosphere with a fervid and new creativity (not only in that context); in your music there are these elements in a different form, in the name of an alien and characteristic sound, although with a further suspension and contemplation, recalling ambient sonorities. But what are the most important references for Hardboiled?

Paul Beauchamp: “I can’t speak for Luca here but personally I can’t really say that I have any specific references. Luca and I both work a lot on sound design and experimentation with synthesis. I’ve always been inspired by the idea of “sound art”. I like the concept of composing music as a form of sonic painting.”

Luca Sigurtà: “Perhaps I wanted from the very beginning of the recordings to focus on electronic music with a ‘northern european flavor’. Cold, minimal rhythms. The use of synths instead brought me back to John Carpenter and all those movie soundtracks that I loved so much.”

4) Let’s talk about other releases from a close past. Luca, Goddess, that is your last soloist album, is in the sign of a smart ambient associated with pop structures and sonorities. Electronic melodies are made of blue and grey tonalities and with a noisy soundscape with brilliant creativity and efforts. A lighting and enlightening work, with digital, almost-glam (in a broad sense) composing. What is the concept behind this release, and what is the context of its lysergically glossy sound?

Luca Sigurtà: “For that record I wanted to focus on the more ambient sound, a sort of return to origins. ‘Goddess’ is my personal tribute to silent film actresses, each song is dedicated to one of them. I’ve always been very attracted to their personal stories, some of them truly tragic. So I tried to find a twilight sound also using the Revox.”

Luca, Naked Brunch, your release with guitarist and compositor Sergio Sorrentino is in the sign of suspended sonorities which develop in an ethereal and naturalistic manner in an almost-flat landscape. Guitar lines recall a terrean sound with a baroque creativity (in a broad way), and your synth attitude sets up glitches and bittersweet and lysergic harmonies. In this case your music creates a soundscape to the guitar, which compares as main characters with a mix of jazz, classical, and avant, where the result follows a kraut way. But what is the concept behind this work and its story?

Luca Sigurtà: “I have known Sergio for many years, we are very close friends and have been collaborating for some years. I respect him very much and love his works as a musician and composer. ‘Naked Brunch’ is our first duo album. We have tried to combine our styles and blend them together. We were looking for an avant-garde sound but at the same time that had a psychedelic imprint. We also wanted to have an ironic part, we sometimes like not to take ourselves too seriously that’s why this title of the release. After this work we increased our collaboration and created ‘Suoni Possibili‘, which is a cultural association but also a label in which to produce our works but also those of artists we like.”

Some questions for Paul. Your recent drone album Needs Must When The Devil Drives districates in a caustic and static music. These sounds are contemplative and dark through a maximum potential of circular synth, which expresses a theatrical paranoia on several instances. Probably, a loop music in the name of these crazy and perplexing times, but further pandemic nihilistic experience. Can you talk about that record and its link to that dark human rarefying?

Paul Beauchamp: “Needs Must When The Devil Drives was actually composed and recorded during the first lockdown in 2020 so obviously the global situation at the time was having an effect on me. The concept of the album though was one that I had in mind for some time. I wanted to elaborate on Brian Eno‘s idea that the recording studio itself is a creative instrument and so from that point of view the pandemic gave me the perfect context to lock myself in the studio for days and days and work. Obviously this form of self-isolation and detatchment came through in the production.”

Grey Mornings, Paul’s more organic work for Venetian label Boring Machine, is a meditated research of sound. The playing is in the sign of wavering ambient and several inserts made of heterodox nature through an elastic way. The creativity is dark and obscure in that playing and structure, between an ambient fervid psychedelia and chaotically baroque and naturalistic field recordings. Paul, how did the organicity of this record happen? Can you talk about its relevant creative process?

Paul Beauchamp: “With Grey Mornings, in my opinion, a lot of the organicity that is present comes from the use of acoustic instruments. A lot of the sound sources that I used (bass guitar, musical saw, dulcimer) were actually played, at least originally, acoustically. Sometimes I would then use the sounds as samples but other times they remained intact as they were performed.”

At the end, can you talk about the next direction of your musical poetry? What did we expect from your digitally lysergic music?

Paul Beauchamp: “I’m usually a bit reluctant to try and guide listeners through their experiences. I’ve always found that it’s best to give everyone their own space to take what they will from music.”

Luca Sigurtà: “I totally agree with Paul’s words. It is more fascinating that it is the listener who discovers his own feelings and emotions.”

Thank you so much for your disponibility, and bye for now.