THE AFRICANIST ORGANICITY OF JOHN COLTRANE
di Giovanni Panetta
A review of John Coltrane Africa/Brass, and a short analysis of the associated context. McCoy Tyner, Elvin Jones and Eric Dolphy, other main characters of this revolutionary sound. 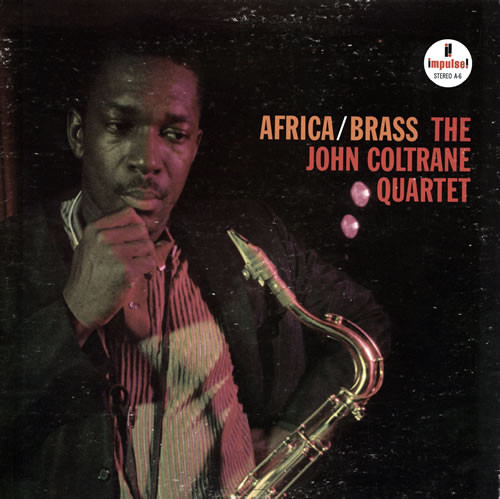 The dawn of free jazz will leave a mark in its near future, in which John Coltrane lived a revolutionary and crucial moment at the end of ’50 years. From that beginning with Ornette Coleman‘s The Shape Of Jazz To Come, published in 1959 (even before with Something Else!!!! in 1958), free jazz was articulated in its several shades, and it gave large space with a fervid creativity to rhythm, harmony, melody and a extended use of different timbres (the Coleman’s plastic saxophone, but there was vibraphone, harp, bells, flute, bass clarinet, soprano saxophone, etc…), producing an innovative sound, necessary in its context. John Coltrane was a tenor and soprano saxophonist that lived in New York in those years, which carried on his sonic research, first as a session man with Thelonious Monk, Dizzy Gillespie and Miles Davis, and then as a meticulous and forward-looking soloist.

At the beginning of the second phase of his music career, and trying to set up his solo effort, Coltrane collaborated and was accompanied by Steve Kuhn, a pianist with a sweet and sour touch, but he will sacrifice the creative expression in its complexity, and so this will cause the breaking of that collaboration. This initial phase drove Coltrane to aim higher, and there will soon be soonly a strong legacy with other two great musicians, that was the drummer Elvin Jones and the pianist McCoy Tyner. Talking about the last personality, the lyrical pianism of Tyner, that is influenced by the Thelonious Monk and Bud Powell‘s atonality, and in which is mixed dissonant but pleasing lines with a exotic and heterogeneous style, makes a change to the Coltrane composing approach. Regarding Jones, a “daredevil” drummer, that was caught by police for drug possession more than one time, his attitude reflect the music style, where the fervid, fast and polyrhythmic percussivity, that is accurate and meditated, was a component which characterized Coltrane sound. Rhythmic, harmonic and melodic strengths are the authentic features in Coltrane and that particular moment, where the libertarian and panteistic power is expressed in records like My Favorite Things, Olé, Ascension and A Love Supreme. 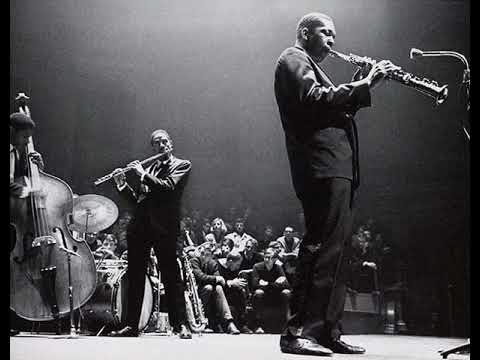 Another clear example of this lyrism is Africa/Brass, an orchestral work with the quartet/sextet that was directed by Coltrane. In this more organic sound appears two basses too, and the masterful presence of Eric Dolphy, who played tenor saxophone, bass clarinet and flute, which gives a completely naïf concerning an Africanist jungle. The above-mentioned musicians’ perturbations (those was John Coltrane, McCoy Tyner, Elvin Jones and Eric Dolphy) describes cubist and abstractist form, which came from the remote african origins which lost in the obscure night of those artists’ subconscious, and which took a spontaneous form in that period. But those years was not only the golden age of a new, free expressiveness, the beatnik feeling had taken over, and it started new-born student movements, even especially the plague of racial discrimination loomed over, and which have widened the debate on the clear (even incostitutional) subjugation of that contemporaneous white suprematism, appealing several activists and US establishment.

In “Africa”, the dominant track of Africa/Brass, the main element is the eclettism, and it evokes a Western atmosphere, in a lyrical and oblique, at the same time, context, and mostly africanist. It should not wonder how this piece includes jazz, classical, African legacy, avantgard, and in a certain sense noise and no wave.In this regarding album, Eric Dolphy wrote the arrangements for orchestra (only his heterodox multi-instrumentalism could have that gift), instead Coltrane and Tyner (through his peculiar idea of harmony) create the arrangements of their quartet/sextet, with a baroque naturalistically atonal creativity. A original concept of dissonance, organicity and lyricism to contemplate, which was born in an enlightening time, which John Coltrane was one of those masterminds, and one of the mouthpieces of a new Africanism, which was intended to evolve and transmigrate in other, following forms.