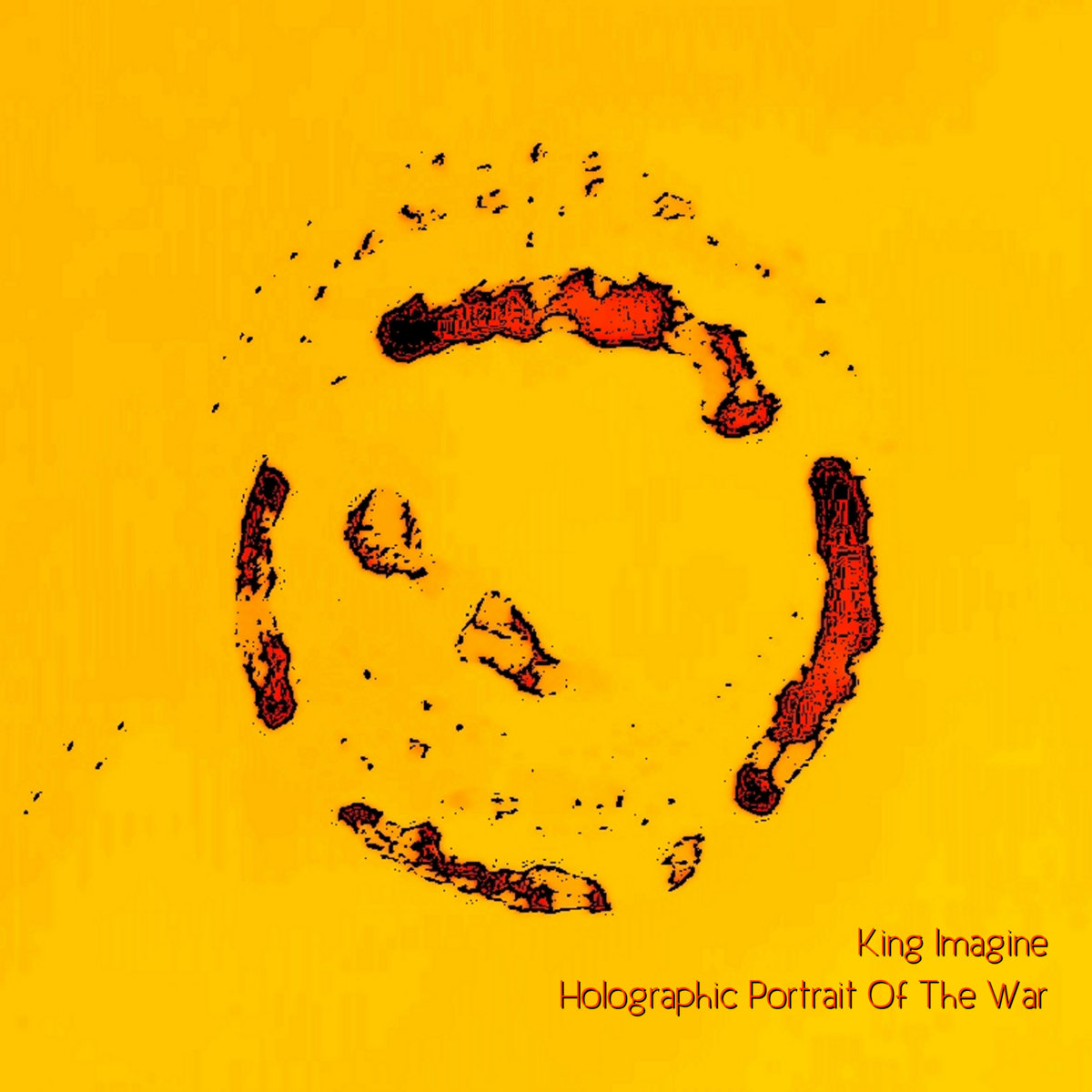 The war in Ukraine, and especially the Russian attack on Mariupol, have and had violented Ukrainian community upsetting all the rest of world. In Mariupol, not casually one of more important strategic points in Donbass, are counted thousands of deads (here the source) attacking dramatically a significant quantity of buildings like the hospital and schools (here some extracts: (1), (2)). We talked about a parti of what is cited in our interview with the other Ukrainian musician Sasha Jabovsky (Gravitsapa), and we want continue to follow this road which concerns that national sound. This time we will move from the Lviv of Gravitsapa to some space/electronic sonorities in Kyiv.

King Imagine, art name of Alexey Mikriukov, is an ambient/noise artist from Kyiv, who contributes in several collaboration with foreign artists like the Italian flutist Bruno Gussoni from Genova, virtually encountered, the German saxophonist and multi-instrumentalist Vanessa Pettendorfer, this last characterized by an enriched and diversified character, between abstractism and a spiritual consistence, and the Belgian alto saxophonist Dararat Chemnasiri, with a free and angolous touch. 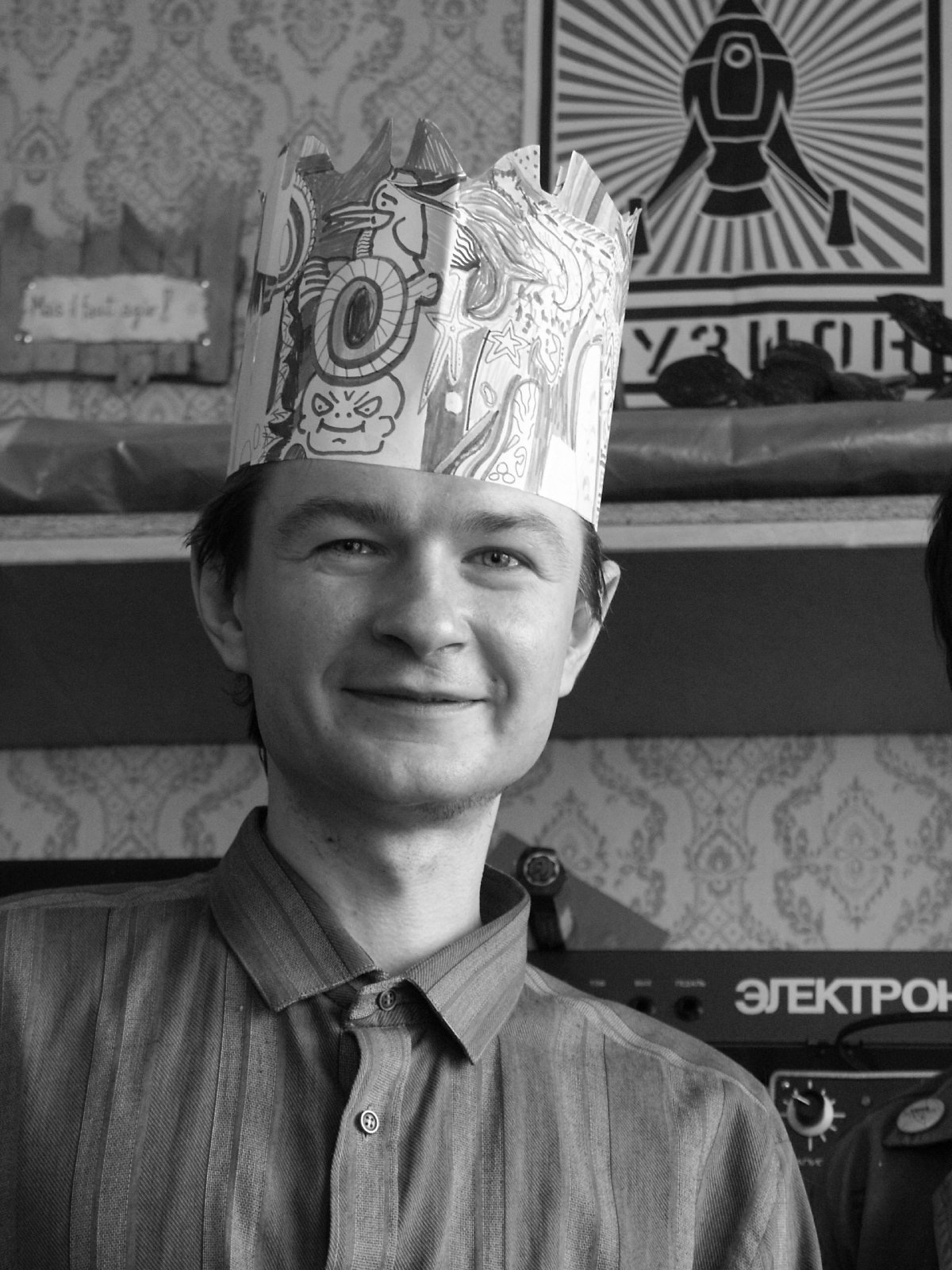 Alexey begins his first sonic experience at 17 getting into noise sonorities, then merging to jazz and folk, through IDM, and over collaborations with the cited and worldwide artists, the other most recent contributions in his poetry are as member of the electronic/trip hop projects Crossworlds and Mavka with alternative, prog shades, where the first one formed by Alexey (composer) and Iryna Lazer (lead singer, composer, performer), and the second group with the addition of Taras Lazer (composer, music supervisor). Their sonic effort moves between ethnic sounds and synthetism, where the rhythm and timbers becomes more automatic with the last album Gagilka – Die Verwandlung (January 1, 2022), a step towards an elegant urbanity despite the characteristic and elegant lyricism.

Following any mouths, Alexey published this April 10 (2022) Holographic Portrait Of The War, an experimeltal and instrumental concept about his feelings on Ukrainian conflict, which he has a more direct relationship. The work is iconic in the mentioned tragic experience in which he is immersed on the country, and it expresses that moment through its idiosyncratic and abstract electronic shapes. It is an electronic work, between harsh noise and ambient, in which is found all the natural and necessary sadness and the rage.
Alexey gives us the special testimony to his work, with direct and natural words which are addressed to his and general audience:  “[The album (Holographic Portrait Of The War)] is a projection of my personal experiences and feelings associated with these events, so as not to go crazy, I record my states, these are albums of event diaries.” 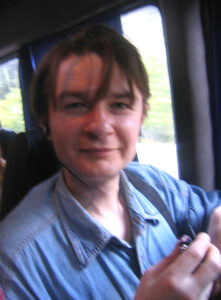 The 0th track of Holographic shows a diversified overlapping of disharmonic sharp synthetic lines which flow describing several artificial geometric shapes, unfamiliar and obscure like the evelish context. The volume increases in its development in the sign of an ethereal battle which domains to everything. It seems the violent and grotesque moment made everything more absurd touching the platonic sphere of human behaviour.
We asked to Alexey how this particular concept happened in this track and what were the points of reference: “0 track is a feeling of tension that has been hanging since December, I felt it at that moment, like something inevitably creeping.”

In the beginning of the 1st track there is a clear and more direct similitude with the war context, with edges of a noise similar to gunshot immersed in general urban sonorities which were altered and manipulated hardly and powerfully in their distortion. At a certain point the atmosphere is more rarefied with stop-and-goes, taking then an even more heterodox shape.

In the 2nd track are expressed rarefied, ambient sonorities, in which sounds with a mechanical periodicity appear in an inhuman form. It seems it wants to express an emptiness and the contemplative silence after the previous disaster, and where everything is immersed in an ambiguous, anxious atmosphere. Our question is how this rarefaction happens: “This is the feeling that occurs after the shelling”.

The 3rd track is characterized by white noise and dissonant and sharp informatic sonorities. In the middle of the track the sound becomes more suspended and rarefied with the same nihilistic attitude, instilling the sensation of emptiness with an ever-changing diversification of the synthetic pattern.
We defined this minimalism devilish, and the author gives his explanations about the related and the most real meaning: “This is an attempt to convey the feeling of stress when trying to fall asleep under fire, these are all my inner experiences that I express”.

In the 4th track a synthetic white-noised pattern with a techno-like cadence which then decelerates its velocity in an almost-dub way. The following part is characterized by a sonic vortex with several and different disharmonic voices; indeed the sound is more majestic and apocalyptical signing dichotomically the contemplated peace or the further continuation of war. Then everything becomes more distended, without losing the general tension and the alien climate expressed by the geometric complexity of electronics; as before, It seems there is a passage to a second phase where the relative scenario develops behind an ideal curtain, with the claustrophobic feeling of mystery, which increases at the end converging towards more negativity.

The next Alexey’s work is De Occupation, where emerges a more analogic, synth-kraut-noise sound. The record represents a more realistic phase of his poetry which recalls the momentaneous dark period. The music is characterized by martial periodic patterns and with an analogic timber, with claustrophobic and massively granular electronics, which both offer an idea of the cited context between the realistic and psychologic plans. In particular the 4th track plays with these two concepts, where the regular and minimal rhythm represents the momentaneous flowing of that horrible ordinarity, with an ever changing noise pattern which represents the interior chaoticity associated with feeling of fearness and anxiety.

King Imagine gives us the following, more realistic interpretation of De Occupation: “This work is just connected with the nightmare and horror that I saw when our troops began to liberate the previously occupied territories. This is the sublimation of the pain that every Ukrainian experienced when he saw these terrible pictures of atrocities and violence against civilians, for this I used the testimonies of those people who were in the occupation and besieged city of Mariupol.”

A collective work with the Alexey’s contribution is A Day In The Life – Inner Temple, on behalf of King Imagine Online Quartet, in which there are the collaborations of Ana Foutel (piano), Bruno Gussoni (flutes), Dararat Chemnasiri (alto sax), and obviously the electronics, piano, objects and natural soundscapes by the Ukrainian artist. If the first part – called “A Day In The Life” (the tracks 1-4) – more tension and stochastic beats (with a practic variable cadence) appear with a heterogenous form, the second one, named “Inner Temple” (5-6), flows with a naturalistic landscape especially dominated by liquid sounds where free jazz/ambient sonorities develop in a harmonizing sensation in the listening associated with an exotic and ethnic melodic creativity.

Here King Imagine offers an essential summary of the situation on the collective work: “The idea of the team was born from the sextet and was based on the fact that such a composition is relevant at the moment due to the busyness of other members of the sextet, the question of quick response to momentary spontaneity, and the ability to communicate most effectively, being in different parts of the world”. 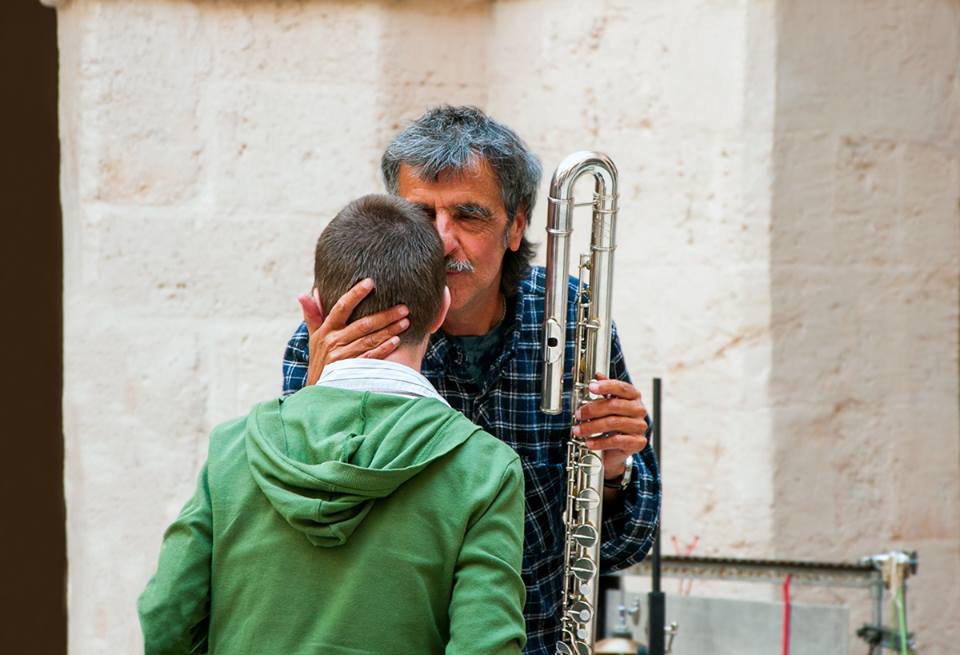 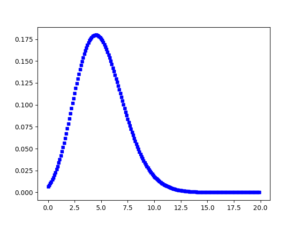 An example of Poisson distrubution.

Talking about the convergence between King Imagine and the Italian world of music, there appears his collaborations with the Italian flutist Bruno Gussoni. They both have collaborated in several tracks recognizable on Soundcloud, not only in the work A Day In The Life – Inner Temple. Examples are the following ones, which we will try to analyse: African Veil has spiritual shades through free flute lines and a periodic electronic pattern like a heavy and essential beating of time which could symbolize the iconoclastic and relentless moment. Another track, Essences, follows the development of a Poisson distribution (for its powerful and dynamic expression), which shades in a rarefied way with essential, atonal elements in the second half of the piece. Instead Shimmering Crystal recalls a constant sound expressed with the flute sound, which imitates a kind of muffled white noise, and Malachite has a dynamic and plastic electronics in contrast with minimal flute lines.

Alexey talks about his meeting and his partnership with Bruno: “I met Bruno Gussoni in 2020 during quarantine, after hearing some of his works on the Soundcloud, I suggested experimenting; his first appearance can be heard here, since then we have been collaborating together both in duet format and in extended compositions, the music that we get is free improvisation, which includes all my experience as a composer and engineer.”

King Imagine and Gussoni continue to release other tracks in bruno gussoni Soundcloud account, for example Mirror Room and Repair, which follows naturalistic and more necessary trajectoties, and then, moving in plastic and more automatic territories, Puzzles, where analogic sound of flute blends with an electronics which is joyful by the rouded timbers. Moreover everything do not forget to highlight the tragic moment in Ukraine, which has accompanied the King Imagine’s last production, which is characterized by chaotic and complex sounds from the same Kievan artist’s upset subconscious.